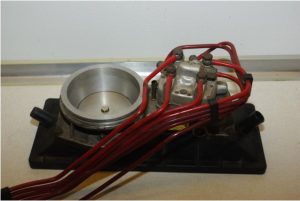 The fuel injectors are electronically controlled valves that spray fuel into an engine. They can open and close many times per second. The injectors have an atomizing nozzle which evenly distributes petrol and diesel for optimal combustion and efficiency. They were designed to replace the old carburettor systems and improve fuel economy, as well as reduce emissions.

One fuel injector is usually found in each cylinder of a car. If you have a car with four cylinders, there will be four fuel injectors.

How Do Fuel Injectors Work?

The fuel injector controls the amount of fuel that is delivered to the combustion chamber. This ensures the correct amount of fuel is injected at the appropriate time. This is how it works:

Single-point is the simplest and earliest type of fuel injection. It replaces the carburettor with one or two fuel injector nozzles within the throttle body. This is the throat of an engine’s air intake manifold. The single-point injection was for some automakers a step toward the multipoint system.

Although not as precise and reliable as other systems, TBI meters fuel more accurately than a carburettor. It is also less expensive and easier to service.

Multipoint fuel injection uses a separate injector for each cylinder. It is located outside the intake port. This is sometimes called port injection. The fuel vapour is almost guaranteed to be drawn into the cylinder by being shot so close to the intake port.

MPFI meters fuel much more accurately than TBI designs. This allows for better air-fuel ratios and other improvements. It virtually eliminates the possibility of fuel settling in the intake manifold. The intake manifold for carburettors and TBI must be designed to heat the engine, which is a way to vaporize the fuel.

This is not necessary for engines with MPFI. The intake manifold can also be made from lighter materials, such as plastic. Incremental fuel-economy improvements result. In order to conduct heat, conventional metal intake manifolds need to be atop an engine. However, MPFI allows engineers more flexibility in their design.

The fuel can “hang around” at a port for up to 150 milliseconds while the engine is running. Although it may not seem like much at first, engineers have addressed this problem by creating a sequential fuel injection that triggers each injector individually. They spray the fuel as spark plugs and do so just before or after their intake valve opens. Although it may seem like a small step, efficiency and emissions improvements can be achieved in very small amounts.

Direct injection allows engineers to control precisely how combustion takes place in the cylinders, as fuel metering is more precise than with other injection schemes. The science of engine design studies how the fuel-air mixture moves around in the cylinders, and how it travels to the ignition point.

The shape of the cylinders and pistons, port and spark plug locations, timing, duration and intensity and the number of sparkplugs per cylinder (more is possible) all have an impact on how fuel burns in a gasoline engine. Another tool in this discipline is direct injection, which can be used in low-emission lean-burn engines.